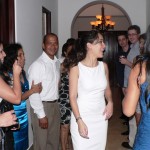 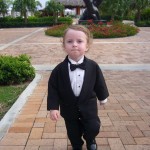 The day of the wedding (Sunday, the 20th) was pretty hectic but everything worked out in the end.  Even Ian got a tux to wear and he and Elaine were second only to the bride and groom (although I’d say they stole the spotlight).  The wedding started about an hour late.  That certainly didn’t help Ian, who’d been in his tux for a little too long.  But my little man was a trooper and even helped carry one of the rings down the aisle.  The wedding was entirely in Spanish but I was able to play my small part. 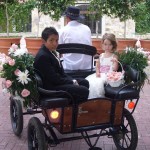 The bride arrived at the church ridding a horse drawn carriage and we had originally thought that Elaine would ride with her, but there was a second carriage that she shared with the other ring bearer.  Ian wouldn’t sit in the carriage but he couldn’t get enough of watching the pony.  It was pretty dramatic every time the pony would disappear from his sight.  In fact, within minutes of sitting down with Jennifer in the church, he kept saying,  “Pony, pony, pony!”  So Jennifer took him outside, only to find out that the pony had already left.  Needless to say, he was not amused.  After the ceremony, there was a pretty impressive fireworks display. 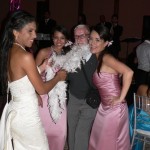 The wedding reception was incredibly fancy.  Open bar is always a plus, but the amount of food was staggering and very well arranged.  There were the standard reception events such as the bride and groom dancing with each other, with parents, with everyone, and the tossing of the bouquet and garter.  After the usual events, we got to experience “La Hora Loca” (The Crazy Hour), which is a Latin American tradition for wedding receptions.  Through the doors came two barely dressed women with a cart full of funny hats, feather boas, and other assorted items for frolicking and merry-making.  It was definitely an hour of craziness that even my grandfather enjoyed. 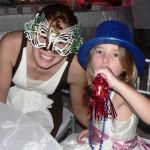 Elaine had a great time dancing and playing with The Crazy Hour noisemakers, while Ian slept through most of it.  He woke up when we tried moving him from Jennifer to my mom.  So we all spent the rest of the night taking turns holding Ian and keeping him entertained.  He even let me take him to the hotel bar and catch up on the day’s football highlights.  Although I didn’t appreciate it at the time, he wouldn’t let me watch the 4th quarter of the Vikings’ game in progress.  Little did I know at the time how painful that would have been to watch.  He really loved watching the piano in the lobby that played itself.

The night ended early for us so we could get the kids to bed.  It was really nice to have the wedding early in the vacation so we could spend the rest of the trip with nothing to do.  Little did I know that “nothing to do” involved so much.  To be continued…

One thought on “Take Me Back To Panama, Part 2”